The following is a work of fiction. Any resemblance to persons living or dead is purely coincidental.
If you belive this crap.

The crazy sonnet writer who is terrifying our poetry professor. And me too.

Back from lectures. The grouchy professor was quite in good mood today, he almost forgot to tell us what a shame we are and how our language and poetry's gonna disappear because we're so miserable. and, oh, he also forgot to tell how our parents have never learnt us anything about respect and that stuff. he had to be in a really good mood, actually. besides that, it was really interesting today, we were talking about sonets and so on, which i find really interesting. we came to the crowns of sonnets and wreaths of sonnets and - can you imagine that some poets wrote the wreath of wreaths of sonets? which sonsists of 211(if writing all the magistrale sonnets and use them in the magistrale sonnet of magistrale sonnets) or 196 sonnets (if leaving the magistrale sonnets out). how can someone
1.) have so much time so he can write 211 sonets at all (and, yes, some poet wrote eight of them!!!!!)!?
2.) find enough same rhyms!?
3.) not get out of ideas for writing, that's 211x(4+4+3+3=14)=2954 lines??? that's a poem after all, not a novel!
the structure of the sonnet is like: 12 lines - two quartains and two tercets. the quartains have rhymes ABBA ABBA and the tercets hev rhyms CDC DCD (there're different versions of rhyming the tercets too). The last line of the sonnet is always also the first line of the next sonnet and also the line in the magistrale.
for example, the first sonnet of Prešeren's Wreath of sonnets: 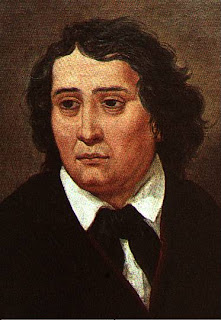 The most famoust Slovenian poet France Prešeren, who wrote the first Wreath of sonnets (there was none of them found before). He wrote about his passionate love to Julija Primic (who didn't love him back), national theme and the poet profession. His Wreath of sonnets is enriched by acrostic "Primcovi Julji". 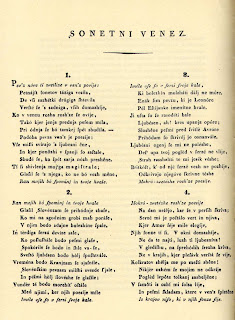 Prešeren's Wreath of sonnets in slovene.

Well, here it is:

A Slovene wreath your poet has entwined, A -> it's also the first line of the magistral sonnet
Of fifteen sonnets is the chaplet bound, B
And in it thrice the Master Theme must sound: B
Thus are the other harmonies combined. A

Now from his source like streams in order wind A
The sonnets, and the head of each is found B
By the last line of the last sonnet crowned; B
This is a semblance of your poet's mind. A

From one love all by thoughts arise, and lo! C
Whene'er I sleep at night they cease to flow, C
But stir when darkness flees before dawn's rays. D

You are the Master Theme of my whole life, E
Which will be heard when I have ceased my strife - E
A record of my pain and of your praise. D -> it's also the first line of the second sonnet of the Wreath of sonnets and so the second line of the magistral sonnet

I can't even imagine how difficult it must be to write "just" a Wreath of sonnet and watch after all those rhymes and meaning ... it's like a puzzle! But how can you get the idea to write a wreath of wreaths of sonnets!? our professor said that the man, who wrote eight of those, is terrifying him a little bit. i couldn't agree with him more. it is terrifying, it really is. nuts man.

p.s.: but, it would be a great achievement to write one one day. wreath of sonnets, the other one ... maybe, if i'll be sent to the jail some day. then i'll have time to get nuts and to write it ;)